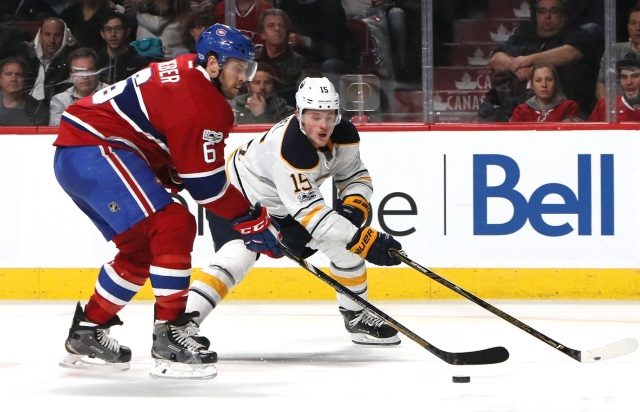 Conor Ryan: Boston Bruins coach Bruce Cassidy said there is no timeline on Charlie McAvoy. He won’t be in the lineup tonight but he could get clearance to practice today.

He’s missed the past two games with an upper-body injury.

There will be an update on his status today.

Forward Zemgus Girgensons could return to the lineup after missing the past four games with an upper-body injury.

Jameson Olive: Florida Panthers forward Nick Bjugstad has been seeing a specialist for his upper-body injury. He could return to practice tomorrow and possibly play this weekend according to coach Bob Boughner.

Weber takes a puck to the face but is okay

Stu Cowan of the Montreal Gazette: Montreal Canadiens defenseman Shea Weber took a puck to the face early in the first period last night. He finished the first period but didn’t come out for the second period.

X-rays showed no fracture to his check. He will travel with the team and it’s assumed he’ll play tonight.

Erik Erlendsson: Tampa Bay Lightning forward Ryan Callahan was given a maintenance day yesterday but is something to keep an eye on.

Assistant coach Derek Lalonde said that forward J.T. Miller could be ahead of schedule. He’s still listed as week-to-week.

Defenseman Braydon Coburn missed Saturday’s game with an upper-body injury but is expected to be available tonight.

Bryan Burns: Lalonde on Coburn: “He’s probably still day-to-day. I think they want to see how he reacted from practice today, but that was a positive. He had a regular practice. It’s a good sign going forward.”