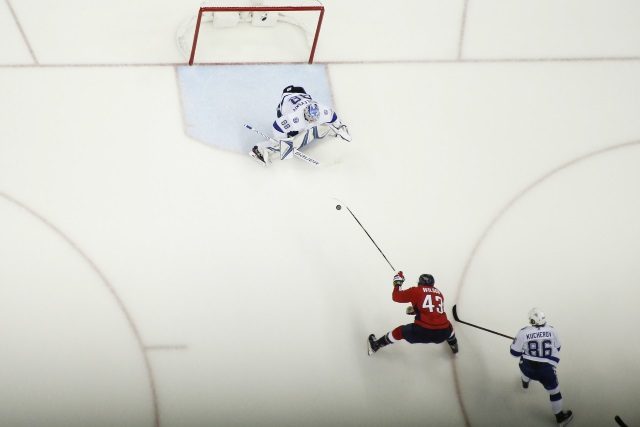 George Richards: Florida Panthers forward Nick Bjugstad is out with an upper-body injury and won’t be traveling with the team.

Scott Billeck of NBC Sports: Clutterbuck cross-checked Kris Letang, who then retaliated with a shot to the head. Thomas Hickey also took a slapshot to the head but returned shortly after leaving.

DeMelo to the IR

Murray Pam: Ottawa Senators defenseman Dylan DeMelo was put on the IR and is eligible to come off the IR on Saturday. Christian Jaros is listed as day-to-day.

Dominik Simon is also day-to-day with a lower-body injury.

Andrei Vasilevskiy with #TBLightning at skate. Started skating last Thursday. Could join practice this week. Thursday is 4 week mark in 4-6 week recovery timeline from fractured foot. Tampa Bay is 11-2 in his absence pic.twitter.com/N6uRH6Ig9q

JJ Regan: Washington Capitals coach Todd Reirden said there is no timetable for when defenseman Brooks Orpik could return to the ice.

JJ Regan: Reirden on Tom Wilson:  “Did an off-ice workout today so we’ll see how he reacts the rest of the day and then tomorrow morning as well”

Reirden on if Wilson could skate this week: “I’m hoping so. That’s the plan, but you just never know with those type of things.”

JJ Regan: Reirden on T.J. Oshie: “The plan was for him to go through practice today and we’ll see how he does later this afternoon and reevaluate tomorrow morning” Reirden added that it’s a possibility that Oshie plays tonight but it depends on how he felt yesterday and this morning.

T.J. Oshie a game-time decision, but will almost certainly be in the lineup against the Red Wings
Pittsburgh Penguins at New York Islanders [Game 29]