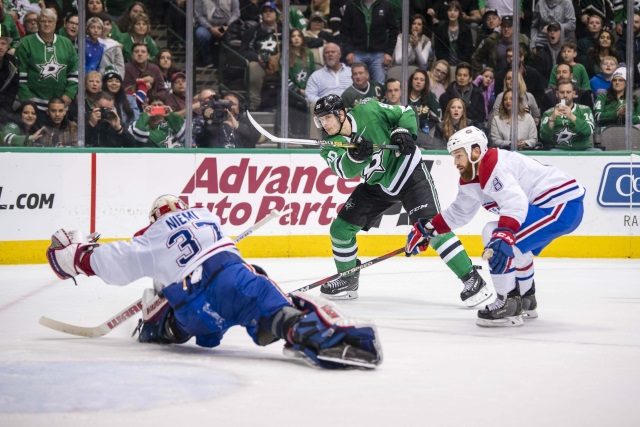 Joe Yerdon: Buffalo Sabres coach Phil Housley said that Jack Eichel was evaluated yesterday and they will have a full update on his status today. Housley is expecting it to just be a day-to-day issue.

George Richards: Florida Panthers forward Nick Bjugstad (possibly out with neck soreness) skated at practice yesterday and was wearing a regular jersey. He skated as an extra forward along with Michael Haley.

TSN Hockey: Montreal Canadiens goaltender Carey Price said that he is feeling “pretty good” and could start tonight against the Canucks.

New York Islanders: Islanders coach Barry Trotz giving an injury update: “Eberle is day-to-day. It looks like Tom Kuhnhackl will probably be ready to go. Thomas Hickey is getting closer, but hasn’t joined the team yet. Filppula is day-to-day right now, but we’ll have a better idea tomorrow morning.”

Pittsburgh Penguins: Forward Bryan Rust returned to the lineup last night and was on a line with Sidney Crosby and Jake Guentzel.

Andersen not ready yet

Dave McCarthy of NHL.com: Toronto Maple Leafs goaltender Frederik Andersen won’t be in the lineup for their game this afternoon.

Andersen has been out with a groin injury. He was in full equipment yesterday before practice and was taking shots from their goalie coach and injured Zach Hyman.

“He didn’t practice so obviously we’re not going to see him tomorrow,” Babcock said. “Then we have a practice day in between (before playing the Vancouver Canucks on Saturday). I don’t know if he can practice one day and come . He’s practicing every day, he’s on the ice and doing his thing.

“He’s feeling pretty good but I don’t ask him. When they tell me (he’s ready), I’ll know.”

Tom Gulitti: Washington Capitals coach Todd Reirden said that they hope that defenseman Matt Niskanen will be able to return tonight after missing their past two games with a lower-body injury.