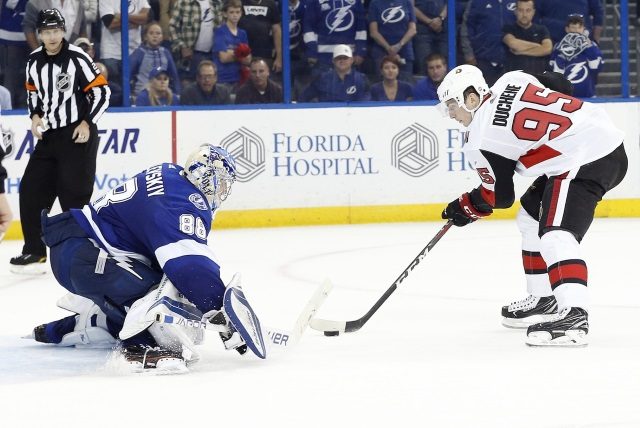 DeBrusk out this weekend

Joe Haggerty: Boston Bruins forward Jake DeBrusk was out last night and won’t play today as he’s not feeling well physically. He took a puck to the back of his head against the Maple Leafs last week and he wasn’t feeling that great during their game against the Lightning.

Boston Bruins: Coach Bruce Cassidy on defenseman Charlie McAvoy: “I don’t know if he played, but he came back. That was league-mandated protocol. He went and got through it. I suppose until tomorrow comes and he wakes up, we’re all going to be a little bit on pins and needles, but he was cleared to come back.”

New York Islanders: Barry Trotz before yesterday’s game on Robin Lehner: “He’s probably going to back up today. He’s had a couple of good days. I contemplated starting him tonight. He’s fully healthy but I just didn’t think he had enough practice time to really give him a fair shot. But he’s back in the fold.”

Andrew Gross: New York Islanders forward Anders Lee returned after passing concussion protocol with what looked like 8-12 stitches and cut under his nose.

Duchene out weeks … Ryan out with a concussion

NHL.com: The Ottawa Senators have put forwards Matt Duchene and Bobby Ryan on the IR after both were injured on Thursday.

Duchene is week-to-week with a groin injury.

Ryan suffered a concussion, so there is no timetable.

“When you lose high-end players, guys that are huge parts of your team, when you lose one it’s big, when you lose two it’s gigantic,” Senators coach Guy Boucher said Saturday prior to a 2-1 overtime win against the Pittsburgh Penguins. “That’s just the reality. You’ve got to figure out a way to have an identity, give yourself a chance to win …”

Vasilevskiy could travel with the team on their road trip

Erik Erlendsson: There is a chance that Tampa Bay Lightning goaltender Andrei Vasilevskiy could travel the team on their Western Conference road trip. He could at least be the backup.