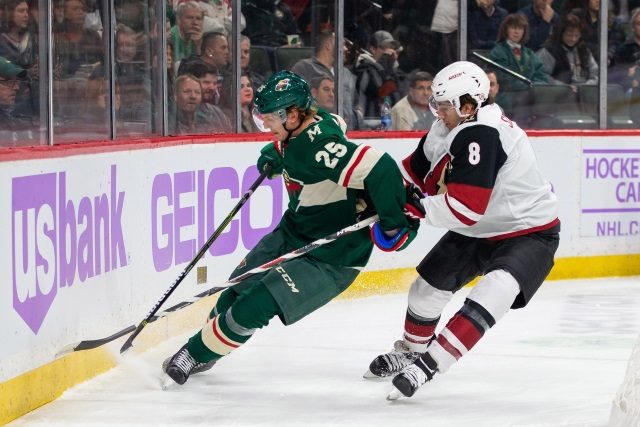 Nick Schmaltz done of the year

Craig Morgan: Arizona Coyotes forward Nick Schmaltz will miss the remainder of the season with a knee injury.

Charlie McAvoy to return to the ice today

Brian Hedger: After the game, it didn’t look like Dubinsky was wearing a walking boot or brace.

Mike Green could return on the weekend

Helene St. James: Detroit Red Wings coach Jeff Blashill said that defenseman Mike Green could be a possibility for their game on Saturday.

No update on Patric Hornqvist and Zach Aston-Reese

Wes Crosby: Pittsburgh Penguins coach Mike Sullivan didn’t have an update on forwards Patric Hornqvist or Zach Aston-Reese. Sullivan got the sense that Aston-Reese could be out of the lineup for “a little while.”

Kevin Kurz: San Jose Sharks defenseman Justin Braun was on the ice yesterday. He has been out with a knee injury.

Kevin McGran: Toronto Maple Leafs coach Mike Babcock said that forward Zach Hyman should be able to return for their next game on Thursday.

Reilly Smith to the IR

Jesse Granger: The Vegas Golden Knights put forward Reilly Smith on the IR. He’ll be out for at least Thursday’s and Saturday’s game.

Danny Webster: Both Smith and defenseman Colin Miller weren’t on the ice yesterday.

Islanders roster moves prove that Lou Lamoriello is not messing around
Islanders News: Winning it in Motown; Ho-Sang called up