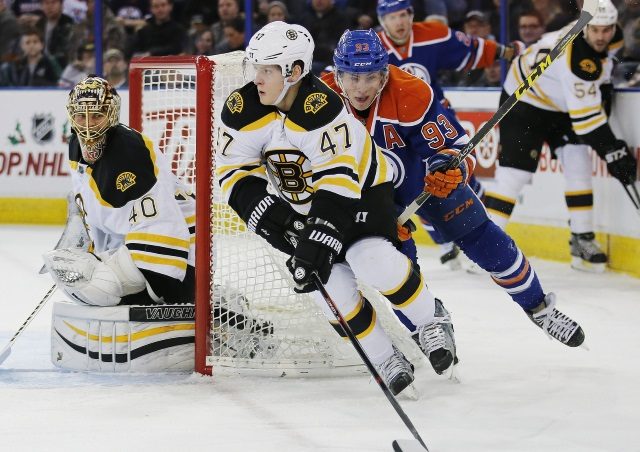 Coyotes not looking at the goalie market

Pierre LeBrun: (going on the possibility of Antti Raanta being done for the season) Asked Arizona Coyotes GM John Chayka if Raanta’s injury means they could be looking at the goalie market for help: “No, we’re going to go with our internal options.”

David Pagnotta of The Fourth Period: Multiple sources are saying that the New York Islanders and pending unrestricted free agent forward Anders Lee are talking about a long-term contract extension.

The Islanders and Lee’s reps have been talking for the past month.

Getting Lee signed appears to be a higher priority at the moment over their other pending UFAs in Jordan Eberle and Brock Nelson. It’s not known if Eberle and Nelson are in GM Lou Lamoriello’s future plans.

Could the Oilers and Bruins team up for a deal?

Matt Porter of the Boston Globe: The Boston Bruins could use some offensive help up front.

The Edmonton Oilers could use some offensive help from the blue line.

Would the Bruins and Oilers be willing to do a trade that included Torey Krug and Ryan Nugent-Hopkins?

Porter notes: “Sure, NHL GMs rarely trade high-profile players with term. But as noted above, these rosters have issues. In making a swap, they could address them and maximize return on two sizable assets. ”

The Oilers were interested in Krug this past offseason.

The 27-year old Krug has two years left on his deal at $5.25 million. He’s scored two goals and added 15 assists in 19 games this season.

The 25-year old Nugent-Hopkins has three more years left at $6 million. RNH can play both center and the wing. He’s scored eight goals and added 18 assists in 30 games this year.

The Bruins may have to include a forward prospect in the deal. The Bruins have Jake DeBrusk, Anders Bjork, Jakob Forsbacka Karlsson, Ryan Donato and Danton Heinen. The Bruins may not want to move DeBrusk who would likely interest the Oilers.