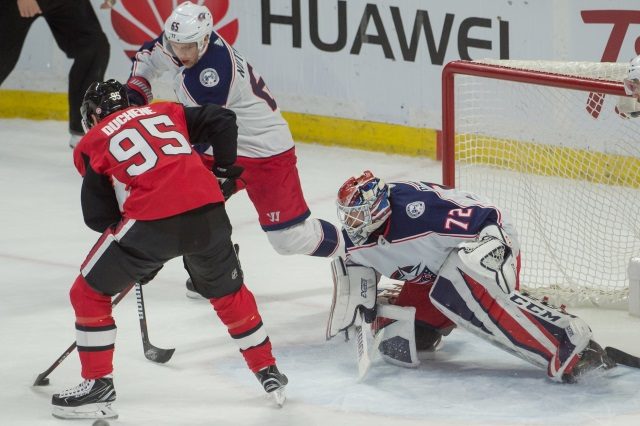 Bruce Garrioch of the Ottawa Sun: The Ottawa Senators have spoken face-to-face twice with Matt Duchene‘s agent, Pat Brisson. Both sides are hopeful that an extension will be able to get done. If deal is not reached in the next month or two, the Senators are going to need to know before the NHL trade deadline if Duchene intends to test the free agent market.

St. Louis Blues GM Doug Armstrong has been working the phones but his very high asking prices are sending mixed messages that he’s willing to trade basically anyone on his roster. Teams are still inquiring about Colton Parayko, Alex Pietrangelo and Vladimir Tarasenko.

“They’ve underachieved significantly and you’ve got to have the ownership’s backing when you attempt to change course the way that they are,” a league executive said Monday. “With where they’re at, they’ve got to sell.”

Parayko and Pietrangelo are the two most likely to be traded.

If Jon Cooper doesn’t take the Lightning deep into the playoffs, there is the belief that new GM Julien Brisebois will want to bring in his own guy.

Islanders GM Lou Lamoriello is active on the trade market looking to make a move.

Los Angeles Kings GM Rob Blake is also willing to make moves and has many players available. They would be happy if someone was interested in Ilya Kovalchuk. Jeff Carter, Dustin Brown and Alec Martinez could be available. Will someone call about Jonathan Quick?

Trade talk would increase for the Blue Jackets if they started discussing Artemi Panarin and Sergei Bobrovsky.