Why the New York Rangers cannot beat the Islanders 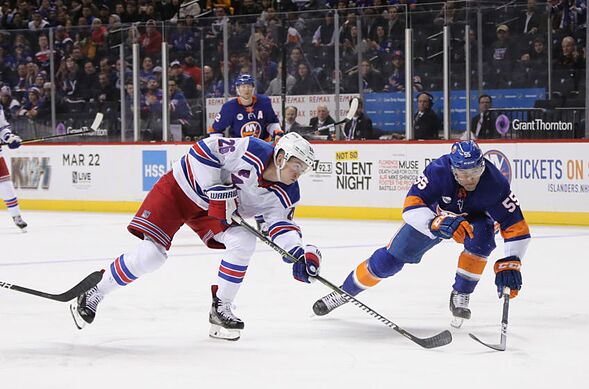 NEW YORK, NY – NOVEMBER 15: skates against the New York Islanders at the Barclays Center on November 15, 2018 in the Brooklyn borough of New York City. The Islanders defeated the Rangers 7-5. (Photo by Bruce Bennett/Getty Images)

The New York Rangers have been unable to beat the Islanders for years.  It seems inexplicable, but there is an easy answer.  It’s just cyclical.

The long history between the New York Rangers and Islanders has had its ups and downs for both teams.  There is no science to it.  It a cycle with the pendulum swinging in each team’s favor every few years.

Except for Nick Fotiu, these players are not New York natives.  They don’t have the investment in history or past records that the fans do. I would venture to say that if you asked anyone on the current Ranger roster about the 1979 playoffs, they wouldn’t have any idea about what happened. I doubt a current Islander was giddy when Ken Morrow scored his OT goal to eliminate the Rangers in 1984.  Heck, only three Islanders were even born in 1984.  These cycles of domination are not a product of extra effort, it’s just what happens and there is history to prove it.

The first cycle was in favor of the Rangers.  When the Isles were an expansion team at the bottom of the standings, the Rangers beat them up regularly.  That all changed  in 1975 when J.P. Parise stuck a dagger in Ranger fans’ hearts with a playoff  winner 11 seconds into overtime.  In those days, the first round was all of three games.  A team could be eliminated in a heartbeat and that ‘s what happened.  The Isles eked out a 3-2 win in the first game at Madison Square Garden. Islander lore was enhanced because virtually no one saw the second game, an 8-3 Ranger win at Nassau Coliseum. Believe it or not, the second game was televised on a new cable television service to about 100,000 subscribers.  That cable channel was call Home Box Office.  Yes, HBO televised a Ranger playoff game in April 1975.  In game three the Rangers came back from a 3-0  deficit in the third period only to see Jean Ratelle lose a faceoff and seconds later, the Parise goal.

Over the next few years, the pendulum swung in the Islanders favor. The Rangers missed the playoffs and the Islanders went deep.   That all changed in 1979 when the upstart Rangers beat the favored Islanders in the Semi-Finals in six games.  Led by Phil Esposito and goalie John Davidson, the series win propelled them into the Stanley Cup Finals.  Any Ranger fan who saw the final game of the series will never forget the image of a dazed Denis Potvin, crumpled on the ice.  That season also saw the birth of the “Potvin Sucks” chant after be broke Ulf Nilsson’s ankle with a hard check.

Beginning in 1980 the Isles went on to win four straight Stanley Cups and the pendulum  was definitely in the Islanders favor.  To make matters worse, in three of their four championship years they went through the Rangers on the way  to the top.  They won 12 of 16 playoff games versus the  Rangers. The eighties were definitely the Islanders’ decade in the rivalry.

In the nineties, the Rangers took their turn at the top. Little did we know that when the Rangers swept the Islanders in the 1994 Conference Quarterfinals, it would be the beginning of an unbelievable Islander playoff drought. The 1994 playoffs were the first of 22 straight years without a playoff series win for the hapless Islanders.  Any insecure, pessimistic Ranger fan should just remember that record of futility.   I’ll say it again….22 years without winning a single playoff series.

From 1993-94 to 2014-15, the Islanders missed the playoffs 14 times and lost in the first round of the playoffs seven times.   The Islanders were mercifully exempt in 2004-05 due to the lockout.  Meanwhile the Rangers were in their own seven year playoff drought until the lockout, only  to come out of it to become a perennial playoff team.

The first decade of the new millennium saw the pendulum swinging in the Rangers favor. This period was one of the dominant cycles in the rivalry and really brought out a  desire by the Islanders to beat their rivals.  Though missing the playoffs annually, they desperately wanted to beat the Rangers.

Last season we seemingly entered a new era in the relationship, with both teams missing the playoffs and  going into rebuilding/retooling mode.   Where the pendulum swings is still a question mark.